Monday the 27th of November 2017 was a very sad day. It was the funeral of my lovely sister Janis. I wanted to mark the day in memory of a very special person.

Janis was wife to John, Mother to Amy and Tom, Sister-in-Law to Sue, Aunt to Alice, relative and friend to many others and my only sibling.

Janis’s funeral took place at Loughborough Crematorium at 11am, with a wake afterwards at The White Horse on Leicester Road in Quorn. I shouldn’t have been surprised, but the turn out for her funeral was astonishing. The crematorium was completely full, all the seats were taken and people were standing all around the room from end to end.

This is the eulogy that John, Amy and Tom Lewin put together, read by Suzanne Buckeridge during the service:

“Janis Ellen Manterfield was born on the 7 September 1957 in the family home at 5 Front Street, Birstall to Dennis and Betty Manterfield. A sister for older brother Roy. Jan’s father gave her the nickname ‘Pod’ because she was so small when she was born, he thought she looked like a pea in a pod. This affectionate nickname stayed with her all her life. Growing to the height of 4ft 10½” tall (always aspiring to be 5ft, but never quite making it!), Pod was living proof that good things come in small packages!

Two years after Jan was born, the Manterfield family moved to 56 Denegate Avenue in Birstall, with a big garden that was landscaped by Dennis. Janis loved spending time in the garden with her Dad; making bonfires, planting seeds, and drinking cups of tea. The large garden also enabled them to have many family pets; so many that at one time the nickname ‘Manterfield Menagerie’ was coined! The pets ranged from dogs and cats, all the way through to Charlie Jones the tortoise. The Manterfields were an active family, going on family holidays around Britain, and regularly attending clubs, such as the Bowmen of Birstall.

Janis left school at 16, and after 6 months at BPX Electrical she moved to the British United Shoe Machinery Company where her parents worked. It was also the place where she met a long haired, bearded individual called John Lewin. Jan always got a lift to work with her Dad, so before work started, she would sit in his office reading the paper. Janis was initially cool to John’s advances and decided instead to hide behind her newspaper when he visited the department. A decade later, fate played a hand when John was on a Saturday night out with ‘the boys’ and happened to bump into Jan. John asked Jan if she would like to go out for Sunday lunch the following day and she agreed.

After a couple of years together, John and Jan planned their first holiday abroad – to the Greek island of Santorini. This first holiday to Greece was very memorable because one night, while walking on the beach in the sunset, John got down on one knee in the waves. It was a good job that Jan said ‘yes’, as the tide was coming in; John had wet trousers all the way back to the apartment!

John and Jan were married on the 2 August 1986, after another holiday in Greece. When the DJ announced that it was time for the first dance, instead of ‘Always and Forever’ as they were expecting, the opening bars of ‘Zorba’s dance’ started playing as John’s friends arrived dressed as Greek dancers! Throughout their time together, Jan and John enjoyed many wonderful holidays to Greece, France, Turkey, Egypt, America and more.

In April 1988, Jan gave birth to her first child, Amy. Jan was over the moon to be a Mum, and took to it perfectly. Three years later, in April 1991, Tom was welcomed into the world. To Amy and Tom, Jan was the best Mum in the world: caring, loving, patient and kind.

When Amy was born, Jan made a decision to go to a local ‘Mum and Baby’ group at the health centre in Syston, as she didn’t know any other young Mums, and wanted Amy to grow up with friends her own age. A large group of friends was quickly formed there.

Jan originally worked as a secretary and shorthand typist, but when Tom started school, she decided on a new career direction, and became a healthcare assistant at PPD. This was the perfect role for someone with such a caring nature, as she was able to put her natural kindness into her work. When PPD closed, Jan continued in a similar role at Bupa. She always enjoyed working with people, and the camaraderie she shared with her colleagues.

Her family meant everything to Jan, and she was happiest with those she loved around her, or on the end of a characteristically long phone call. She also loved hearing from her French friends, and her relatives in America and Brighton. While bringing up her children, Jan remained tireless in supporting her parents and auntie, dedicating herself to their care, as she did everyone who ever needed her.

Jan was well known for her thoughtful words, cards and notes. Any occasion, Jan always sent a card in her neat handwriting, usually with appropriate, sparkly confetti inside. She wrote notes to Amy and Tom in their lunchboxes all the way from their first days at school, to the end of sixth form. Notes were left inside the door if she had gone out, and upstairs if she was working a night shift. Such was the care and thought that went into everything she did.

Everyone who knew Jan said that she was lovely, and she truly was. It is customary to focus on a person’s good points in their eulogy, but the truth is that Jan really was a good person, beautiful inside and out. It was her way to focus on the good in life, and to see the best in everyone.

Jan considered herself to have led a happy life, filled with the love of the many people who mattered to her; and that is the way that she would want to be remembered. Happy, and loved.”

Now it’s an immeasurably sad time, but Janis had early onset dementia, so in one way it’s a relief to know that she is no longer so confused and anxious. It was terrible to see my bright, caring, smiling sister gradually fading to the awful illness. I really don’t know how John coped from day to day with caring for Janis during the last couple of years.

Janis was born when I was five years old; she is the only person I’ve known for the entirety of their life. On the day she arrived, at home in Birstall, I couldn’t wait to meet my new sister. I whiled away the time drawing on a small blackboard easel, then Dad came to fetch me and we went up to my parent’s bedroom where Mum had just given birth.

Mum was in bed, the District Nurse was fussing around and tidying up, and my little sister was wrapped up and sleeping. I remember being slightly surprised because Janis was shiny, almost glistening, a tiny bit wrinkly and quite red with blue tinges. Being already familiar with how babies looked, I had expected her to be much paler.

Perhaps because I was a few years older or maybe because we were simply compatible personalities, but whatever it was we always got on very well. We played together, building dens with boxes and blankets, dressing up and posing our poor long suffering menagerie of pets, setting up lending libraries with our books, play fighting with sticks and dustbin lid shields, and probably many other games that I’ve since forgotten.

I frequently teased and joked with Janis; we laughed and giggled together at many silly things. I miss our familiarity and companionship, or siblingship, or whatever it might be called.

I always looked forward to her visits while I was at art college in Leeds and after I moved to Nottingham to work, and the many holidays we had together, with family and with partners.

It was a huge privilege to know Janis and I will miss her so much.

I’ve been touched with the kind thoughts and comments made on social media since I posted the composite photo of Janis at different ages. Here are just a few of them:

“Very sorry to hear this, No age is it, seems like she was cheated. I hope she enjoyed her life, I suspect from the photo’s that she brightened many. Thinking of you.”

“Really sorry to hear that. My condolences to your family. If personality does affect the face as we age she must have been a delight, her smile is wonderful.”

“She’s beautiful. I’m so sorry you had to lose her so young.”

“Best wishes and my thoughts to all.  I love that she was smiling through all those images.”

“I’m so sorry for your loss. What a beautiful smile Janis had.”

“Lovely pictures. Thanks for sharing. Condolences to you and all she held dear.”

“What great photographs, she looks like a lovely person. Thinking of you all x”

“I’m happy you had such a wonderful sister and I’m sorry for your loss. She was born about 10 months before me.”

“She looked to be a sparkle of life to many. 💖 My Condolences.”

“Such a sad loss to you and your family. What a beautiful sister you’ll always hold dear.” https://youtu.be/IMtnLkXCKlY

“My condolences Roy. Her pictures indicate a happy demeanour. – Bet you made her laugh lots.”

The following photo montages are six panels I put together with images I had of Janis, family and friends, and that John arranged to be printed and displayed at the wake. 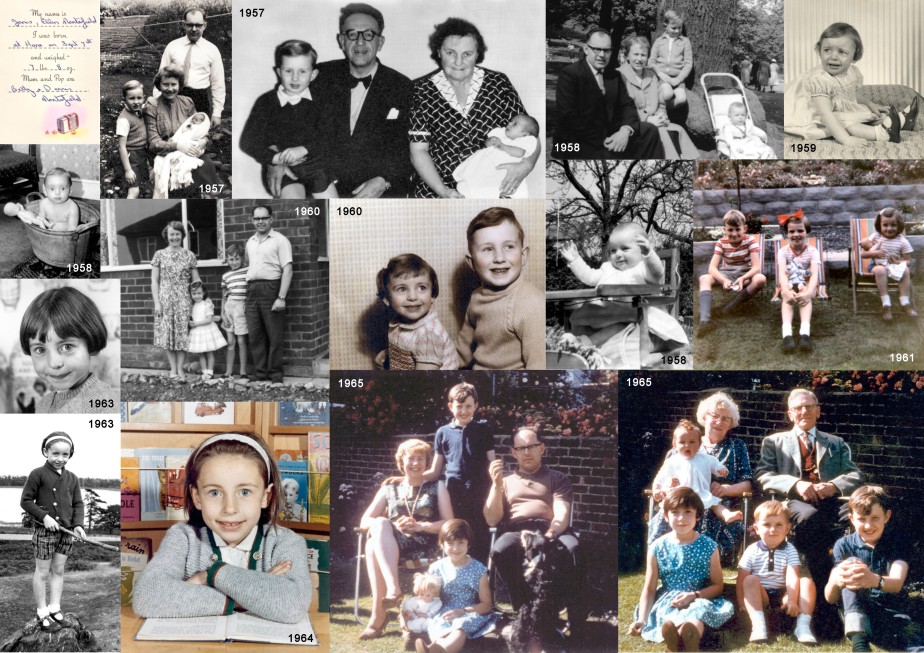 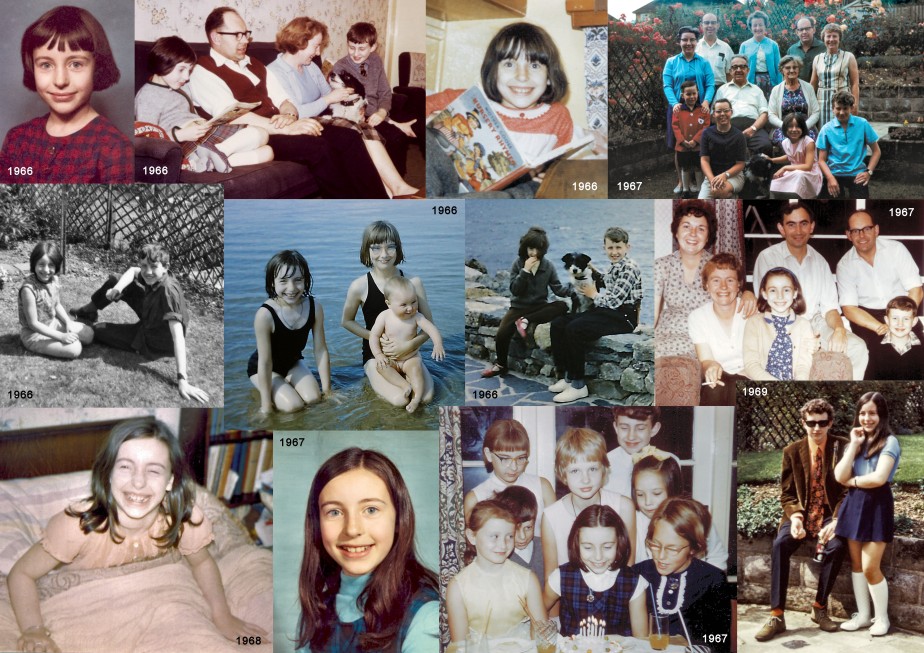 Back to Family history

Know Pun Intended now has its own blog; click the square image below to be taken there: