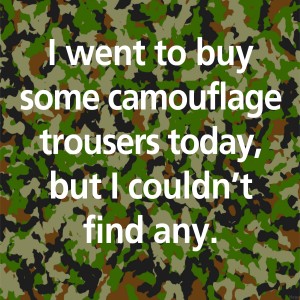 I thought I’d visit some different stores, but when you’ve seen one shopping centre you’ve seen a mall.

I think the local dry cleaners can repair my trousers, or at least sew its seams.

Never get behind the Devil in a Post Office queue, for the Devil has many forms.

I’m going to a local shop for the first time; I’ve no idea what’s in store.

A ladder has been stolen from a hardware store; the manager says that further steps will be taken.

I went to buy some camouflage trousers today, but I couldn’t find any.

Plastic surgery is very expensive; amputations cost an arm and a leg.

Why can’t fishmongers be more generous? Because their business makes them sell fish.

I went to the music shop and I said ‘What have you got by The Doors?’ He said: ‘A bucket of sand and a fire blanket!’

A shopkeeper just tried to sell me Supergirl, Lara Croft and Wonder Woman. I think he might be a heroine dealer.

I went to the hardware store to buy a curtain rod and the manager asked me how long I’d want it; so I told him I’d like to keep it.

Our baker has a sense of humour; he bakes wry bread.

I’ve bought one of those memory foam cushions, but I can’t remember where I put it.

The bicycle shop owner broke his ankle and was unable to peddle his wares.

At the grocery store a dangerous new strain of bacteria has been found in packs of soft butter; and it spreads easily.

I know I’ve bought lots of Velcro cable grips, but I can’t find any now. I must be losing my grip.

A pub started brewing in-house because they loved draught beer, but in the end, they bottled it.

I saw a huge new funeral parlour opening today; it was quite an undertaking.

Our butcher sells sausages online; but the link’s broken.

Our butcher backed into his meat slicer; now he’s got a little behind in his work.

Our butcher had to sell all his rabbits and pheasants, because he didn’t want to give the game away.

I bought eight legs of venison from our butcher for £40; is that two deer?

I asked our butcher if he had a capon, but he said; “No, who do you think I am, Batman?”

I bought some Toulouse sausages today, now I can’t find them; they must have been too easy Toulouse.

I only asked for a leg of lamb from the butcher, but he’s given me the cold shoulder.

Horse meat was once sold in a lot of British butcher shops, but they were flogging a dead horse.

In the café today I tried to grab something to drink my milkshake with, but I was just clutching at straws.

A car showroom used to smuggle cars into the country, until they were convicted of trafficking.

I bought my wife a pocket calculator in the shape of a castle; I don’t think she’ll like it, but it’s the fort that counts.

I’ve ordered some German food over the internet; the sauerkraut has arrived but the wurst is yet to come.

I recently bought some very expensive perfume as a gift; I’ve no common scents.

Stationery traffic has been blamed on the huge number of vehicles delivering envelopes & writing paper.

“Do you sell hot water bottles?” ~ “I’m afraid not; have you tried Boots?” ~ “Yes, but the water comes out of the lace holes”

I managed to buy twelve rare collectable postcards for only 10 US cents, but then found out they were a dime a dozen.

I decided against a takeaway, because the shop owner had a chip on his shoulder.

I drove to the supermarket with a tiny carrot; I was in such a hurry I had to take the shortest root.

Milliners are very irritable; they can get angry at the drop of a hat.

Know Pun Intended now has its own blog; click the square image below to be taken there: