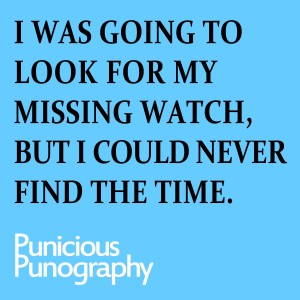 I used to have a fear of hurdles, but I got over it.

I’m reading a book about anti-gravity; it’s impossible to put down.

I’m glad I know sign language; it comes in handy.

If towels could tell jokes, they would probably have a dry sense of humour.

Police were called to a nursery where a three year old was resisting a rest.

I was going to look for my missing watch, but I could never find the time.

A man had his left arm and leg amputated; he’s all right now.

I wondered why the football was getting bigger, and then it hit me.

I couldn’t quite remember how to throw a boomerang, but then it came back to me.

If you asked a plastic surgeon to make you look like a pelican, would you get a massive bill?

When ancient wall sculptors finished their work, it was a relief.

Someone left a piece of Plasticine in my house. I didn’t know what to make of it.

As one frog croaked to the other; “Time’s fun when you’re having flies!”

Darth Vader knew what Luke Skywalker was getting for Christmas because he felt his presents.

I bought my wife a wooden leg for Christmas. It’s not her main present, just a stocking filler.

Just watched a religious order playing stringed instruments; there’s too much sects and violins on TV these days.

I nearly lost my frog puppet recently; it tried to Kermit suicide.

Never trust an atom. They make up everything.

I saw a kidnapping today, but decided not to wake him up.

I’ve spilt glue all over my autobiography. At least that’s my story and I’m sticking to it.

I’ve just eaten a very hard biscuit; that was one tough cookie.

There are a few grave diggers wandering around the local graveyard; I think they’ve lost the plot.

I have a job crushing pop cans. It’s soda pressing.

Why did the Archaeopteryx catch the worm? Because it was an early bird.

What do you call a dinosaur that smashes everything in its path? Tyrannosaurus wrecks.

Palaeontologists thought they’d found new evidence of a missing link, but it was just another fossil arm.

There’s a terrible smell in the local Apple store; it’s a shame they don’t have Windows.

I use my iPhone when I can’t get to sleep; I have a nap for it.

I found out why our refuse collectors are so miserable; they’ve been down in the dumps.

Whoever stole my Microsoft Office DVD is in big trouble; you have my Word.

A woman said she’d recognised me from the vegetarian club, but I’d never met herbivore.

I stayed up all night to see where the sun went, and then it dawned on me.

What do you call someone with neither a body nor a nose? Nobody nose.

I heard a song about a tortilla today; actually it was more of a wrap.

I decided not to return to my drumming lessons for fear of the repercussions.

I heard that OXYGEN and MAGNESIUM were going out and I was like O Mg!

If the devil ever loses his hair there will be hell toupée.

If anyone knows a really good fish pun, let minnow.

When I found out my toaster wasn’t waterproof, I was shocked.

I like to sing songs without choruses, but usually I refrain.

Would you like to know my secret to being a successful mime artist? I’m saying nothing.

My wife asked me to mend the plug on her fan; I simply refused.

Why do you never hear a pterodactyl use a toilet? Because the P is silent.

I haven’t done the hokey cokey in years. As you get older, you just forget what it’s all about.

I just read an advert for a job inspecting mirrors; I could really see myself doing that.

I have an irrational fear of speed bumps; but I’m slowly getting over it.

People who shorten their name to Pat are missing a trick.

Picasso once had a job as a stadium illustrator; he always drew a big crowd.

I worked in a paperless office once; everyone avoided the toilets.

The invention of the pickaxe was ground breaking.

I had to fire a masseuse today; she was rubbing people up the wrong way.

Apparently, the Sydney Opera House is off quay.

I have a very successful business building yachts in the attic; sails are going through the roof.

I often get a lift from an old school friend who always drives in reverse gear; we do go back a long way.

People keep telling me I’m too sceptical, but I don’t believe them.

I found some great puns at the drapers while I was looking for new material.

This book of incantations is useless; the author didn’t use a spell checker.

I’ve ordered a reversible jacket; I can’t wait to see how it turns out.

I used to enjoy archery, but it has its drawbacks.

Will glass coffins prove popular? Remains to be seen.

If you were sent down for a few years, it could be used to stuff quilts.

I know a professor who had his appendix removed, but he still has a full set of footnotes and an extensive bibliography.

Parachute For Sale: only used once, never opened, small stain.

I don’t like my tennis coach’s serve, so I keep returning it.

I swallowed some food colouring by accident and now I feel like I’ve dyed a little inside.

I used to hate maths but then I realised decimals have a point.

A cardboard belt would be a waist of paper.

Last year I joined a support group for anti-social people. We haven’t met yet.

My therapist has suggested I take something for my kleptomania.

There’s a band called 1023MB. They haven’t had any gigs yet.

On maps of Florida the key is always at the bottom.

My daughter said I couldn’t build a car out of spaghetti. You should have seen her face when I drove pasta.

I was almost crushed recently by a pile of books, but I’ve only got my shelf to blame.

I’ve just been on iTunes trying to sync ‘The Titanic’.

A man walks into a betting shop and asks “Can I back a horse in here?” The bookmaker nods, so the man shouts “Okay Jim, back her in!”

What’s the bear minimum? One bear.

I went to a duck fancying club once. It was pretty fowl.

I’ve had amnesia for as long as I can remember.